The IYSSE insists on full equality, within the framework of a massive social investment to guarantee all social needs, including free and open admission to universities. The levels of inequality that exist in the world are virtually without precedent in history. The apologists for capitalism claim that inequality is not related to the economic crisis, as if the withdrawal of trillions of dollars from productive use has no economic impact. The continual and insatiable drive of the financial aristocracy for more and more money has bankrupted country after country and fueled one speculative binge after another. Immediate measures must be taken to promote social equality and a radical redistribution of wealth. 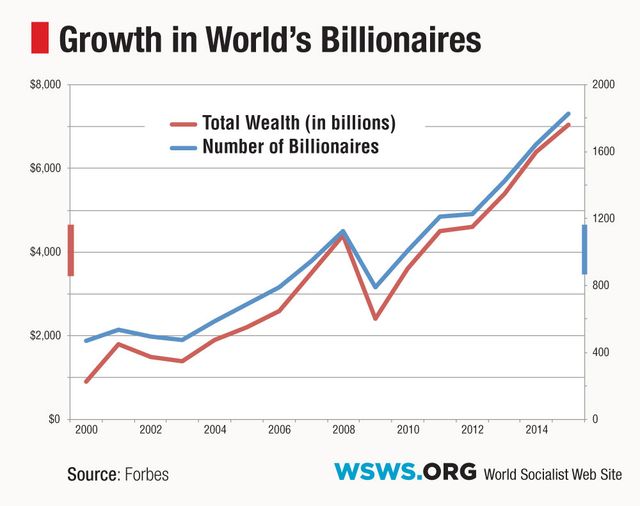 Over the next 20 years, some 500 people will hand over to their heirs more than $2.1 trillion, an amount larger than the gross domestic product of India, a country of 1.3 billion people.

The vast accumulation of wealth by the financial elite is predicated on the continuous reduction of the share of social resources going to the working class. Workers’ incomes have stagnated for decades throughout North America and Europe, and in many countries they are significantly lower than they were before the financial crisis.

The unending accumulation of wealth by the super-rich is the product of the single-minded policy of the ruling class carried out over decades and escalated since the 2008 financial crisis, itself triggered by the criminal activities of the financial elite. The US government, under Democratic President Barack Obama, funneled nearly $7 trillion into the financial system, which has been used to prop up over $30 trillion in financial assets. Central banks throughout the world have followed suit.

The enormous chasm between the super-rich and the vast majority of the population, the working class, is the undeniable defining feature of life throughout the world. There is concern among some of those responsible for this state of affairs that capitalism is, as Marx and Engels put it, producing its own gravediggers in the form of an increasingly restive and hostile working class. 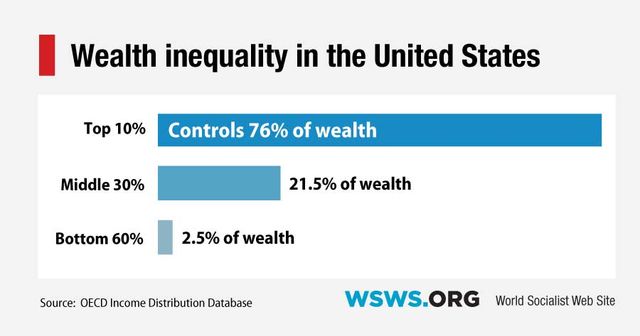 Global corporations such as Amazon have used the mass unemployment arising from the economic downturn to slash wages and impose speedup on their workers, while governments around the world have utilized the economic crisis as an opportunity to impose deep austerity measures.

Parasitism is the social cloth from which the global plutocracy is cut. It makes its wealth not through production, but through cheating, speculation and plunder. It uses its immense resources to dominate political life and pursue policies aimed at its own enrichment at the expense of the great mass of mankind.

The response of the plutocracy to the growth of social tensions is not reform, but repression. Massive intelligence, police and military apparatuses have been erected, directed ever more openly at the population at home. The noxious political ideologies of the last century—fascism, chauvinism, authoritarianism—are being resurrected again, to be turned against any challenge from the working class to the rule of the plutocrats.

It is hopelessly naive to believe that any of the great problems confronting society can be resolved without breaking the stranglehold of the financial oligarchy. Its wealth must be expropriated; the corporations it controls must be nationalized under the democratic control of the working class, so they can be run in the interests of social need, rather than private gain.