IYSSE at University of Wisconsin Milwaukee

The International Youth and Students for Social Equality (IYSSE) at the University of Wisconsin – Milwaukee (UWM) was active from 2012-2014 and was recently reestablished in the Fall of 2017.

The founding of the IYSSE at UWM came out of the massive Wisconsin protests of 2011. In opposition to Governor Scott Walker’s attacks on workers, only the Socialist Equality Party called for a general strike to mobilize the working class to fight for their own interests, independent of the two big business parties.

Coming out of this struggle, the IYSSE at UWM played an active part in the Socialist Equality Party’s bid to put Jerry White and Phyllis Scherer on the Wisconsin ballot for US President and Vice-president in 2012. The IYSSE held campaign meetings on campus and used the election to engage with workers and students throughout Southeast Wisconsin. The IYSSE also campaigned actively at the Caterpillar plant in South Milwaukee. As part of this work, the IYSSE actively intervened in the 2013 Caterpillar strike in South Milwaukee, fighting to build rank-and-file opposition to the concessions contract being pushed by the United Steelworkers (USW) union.

The newly reestablished IYSSE at UWM seeks to build upon this legacy. The IYSSE at UWM holds weekly meetings at 6:15 pm in UWM Union room 343, where we discuss the fundamentals of Marxism and the socialist perspective on current events. 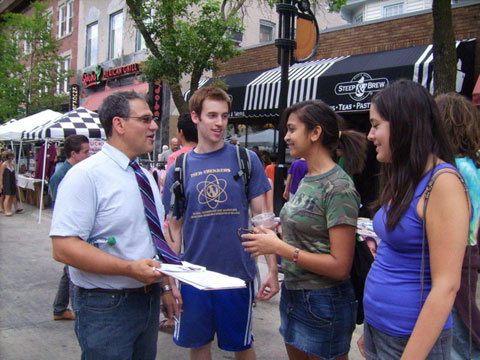 SEP candidate for president campaigns among youth and students in Madison.