Sixteen years after the United States launched the “war on terror,” the entire world is being dragged into an ever-expanding maelstrom of imperialist violence. The breakdown of global capitalism that erupted in 2008 has vastly accelerated the predatory drive by the imperialist powers for a new division and redivision of the world. Already, in the two decades since the dissolution of the Soviet Union, the world’s major imperialist powers have visited destruction and death on millions of people in wars in the Balkans, Middle East, Central Asia and Africa. The war drive is a conspiracy of the capitalist elites, orchestrated by the highest levels of government, the military-intelligence apparatus, the corporate-financial oligarchy and a corrupted right-wing media, without even the pretext of democratic debate.

The United States has been continuously at war for a quarter century, longer than most high school and college students remember. The US Senate voted 89 to nine this year to authorize $700 billion in spending for the military and intelligence agencies, an $80 billion increase from 2016 and $26 billion more than President Donald Trump requested earlier this year.

The bill’s total of $700 billion per year equals $80 million in military spending per hour and $22,000 per second. The latter figure is considerably greater than the median pre-tax yearly individual income for the bottom half of the US population—just $16,200

The US now spends more than the 10 next largest militaries combined. It spends over three times more on its military than China and over 10 times more than Russia. Real annual military spending by the United States is even higher, once nuclear weapons funding, interest payments on foreign wars, and the cost of veteran care is included. With these items, the annual amount is closer to $1 trillion.

A UN analysis recently reported that only $265 billion annually would be required to end conditions of extreme poverty and hunger worldwide, a sum that amounts to less than 13 percent of annual worldwide war expenditures in 2015 prices. The $700 billion dollar US military budget alone could feed the malnourished population, some 815 million people, for 23 years, or provide free vaccines to all children in the world’s 117 poorest countries for 10 years.

In the US, $700 billion could provide each homeless person with a $500,000 home, cover the annual health care costs of 70 million Americans, pay off the student loan debt of 19 million borrowers, or finance the total rebuilding cost for every hurricane over the past 20 years. $700 billion could be used to create a high-speed rail network, provide flood and earthquake protection to every region in danger, or fund planning for safe and comfortable emergency evacuation in case of natural disasters.

Trump speaks for a US financial and corporate oligarchy that feels itself under siege. It fears growing popular anger. It has been shaken to the core by the revelation during the 2016 election that a broad social constituency within the working class and among the youth is intensely hostile to the profit system and sympathetic to socialism.

Ultimately, Trump’s belligerent threats of war and nuclear annihilation are the projection onto the world stage of the class policy pursued by the American ruling class at home, and the very advanced state of political and social tensions within the United States itself.

The fight against war is the fight for socialism

The struggle against war must be rooted in the working class. The IYSSE places this struggle at the center of its political work. We insist that this is not separate from, but integral to, the fight for socialism. We warn youth and students that a new world war is not only possible, but inevitable without the emergence of a mass revolutionary movement based on the working class and dedicated to putting an end to capitalism.

While the economic system operates on a global scale, with industry and finance controlled by transnational corporations, capitalism remains rooted in a system of nation-states. In the final analysis, the national state serves as a base of operations from which the ruling class of each country pursues its interests on the world stage. The uncontrollable drive of the main imperialist states for geo-political dominance, spheres of influence, markets, control of vital resources, and access to cheap labor, leads inevitably to war.

The IYSSE demands the immediate withdrawal of all US military forces, and calls for an end to threats against Iran, North Korea, Russia, and other countries, which, for one or another reason, are seen by the White House and Pentagon as obstacles to US imperialism’s global interests. It opposes the remilitarization of Germany, Japan and the other imperialist powers. The IYSSE encourages and supports the widest mass protests against militarism and war. But given the fact that the causes of war are embedded in the economic structure of society and its political division into nation-states, the struggle against imperialist militarism and war can be successful only to the extent that it mobilizes the working class on the basis of an international revolutionary strategy and program. 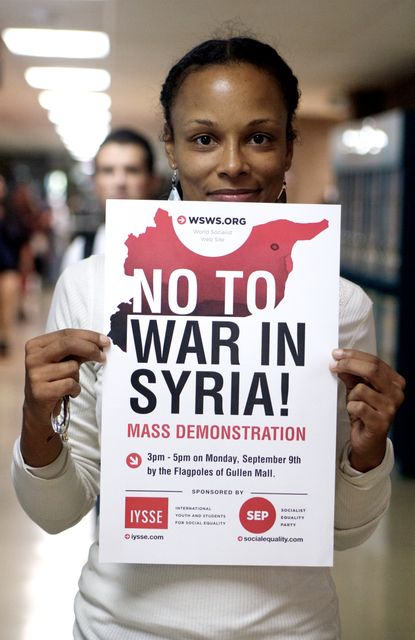